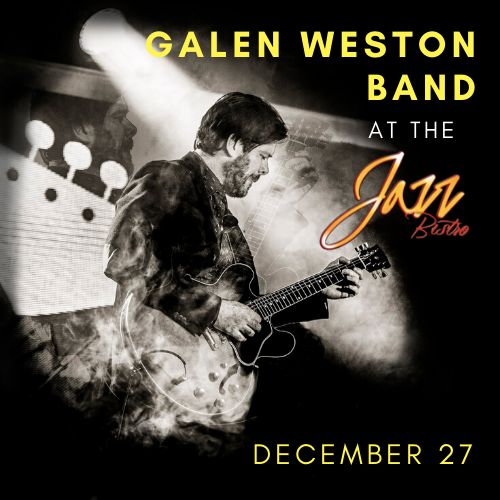 In 2015, Galen Weston took the jazz scene by storm with his innovative debut album “Plugged In”. The album was met with accolades from critics like Bill Milkowski, who described Weston’s skill as having “unapologetic fusion chops [that] wail with conviction and rare facility, a talent deserving wider recognition”. He opened for the first part of the Gipsy Kings’ 20-city North American summer tour, before touring alone in the US and Europe. After 2 years, he followed up his first album with “The Space Between”, produced by 14-time Grammy winner Steve Rodby, an album dedicated to exploring his range after years of touring, with songs alternating all the way from poignant ballads to Afro-Cuban jams.  The band live presence is electric thanks to their intense rock jams honed by years of touring, which all showcase Weston’s stinging guitar lines on his yellow Fender Stratocaster. The band features fellow Canadian musicians Richard Underhill on alto sax, Matt Horner on piano, Lukas Kytnar on electric bass, and Michel Medrano Brindis on drums and Latin percussion. Weston finds inspiration in his melding of different elements, saying:

“My music represents a sonic exploration with my Yellow Stratocaster, ES-335, and other instruments on a years-long journey of writing and recording across a vast musical territory. Fueled by the inspiration of my favorite jazz and instrumental rock influences, this album is the culmination of many hours spent together with my guitars taming the howling of vintage Big Muff’s, cleaning tape heads on old echo machines, and tweaking the tone knobs on my classic Marshall and Fender amps in the simple yet enduring search of great tones.”

Galen Weston recently completed a tour in May 2019, which included performances at the Quasimodo Club in Berlin, the Reduta Jazz Club in Prague, the Harlem Jazz Club in Barcelona, and the Mojo Club in Hamburg and many others. In November, he completed his first-ever tour to Italy where he played concerts in Rome, Bologna, Genoa, Turin, and Naples, as well as visiting Switzerland, Austria, Germany and France.