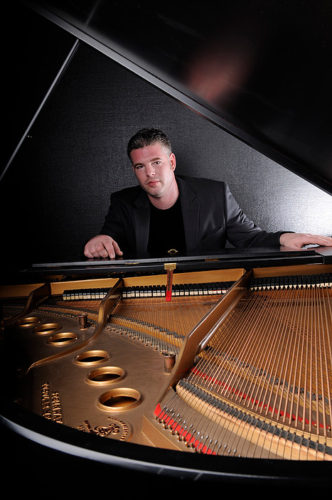 His music has been featured on The Tonight Show with Jay Leno, Live with Regis and Kathy Lee, The Today Show, Late Show with Craig Kilborne, American Idol, Dancing With The Stars, The X-factor UK, and many others. Robert has also composed scores for CTV, CBC, City-TV, HGTV, Comedy Network. As a pianist he has played, written and recorded with such artists as the late Jeff Healey, Michael Bublé, Colin James, Tom Wilson, Kim Stockwood, Jane Birkin, Bob Rock and more.

Robert wrote Michael Bublé’s hit single, “Hollywood”. The song reached #1 in both Canada and the United Kingdom, and the EP was Billboard’s #1 adult contemporary album for several weeks after its release. Robert also played the piano and sang the falsetto background vocals on “Hollywood”, which was produced by the legendary Bob Rock.

Robert is known for his virtuosic technique, uncanny eidetic musical memory, and his highly passionate and personal performances. He has performed and recorded extensively both as a soloist and as a sideman for many high-profile artists. At age 16, Robert was also one of the youngest people to receive a four-year tuition scholarship to the prestigious Berklee School of Music in Boston MA.

In addition to his B. Mus degree from Berklee, Robert holds a B. Ed from the University of Toronto. Robert was honoured with U of T’s “Music Education Innovator of the Year” award in 2004. Robert continues to mentor young musicians both privately and through in-school workshops.