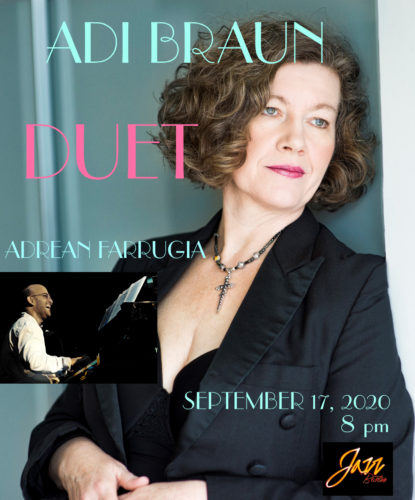 Critically-acclaimed singer/songwriter Adi Braun launches her latest recording, Moderne Frau, which pays tribute to the women of Weimar Berlin and the music of the 1920s. Stirred by her lifelong passion for German cabaret, Braun’s 5th recording features music by leading composers of that era and includes three of her own original songs.

Moderne Frau follows Adi’s previous celebrated recordings: Canadian Scenes I (2010), which marked her singer/songwriter debut; Live at the Metropolitan Room (2007), recorded off-the-floor at New York’s renowned jazz/cabaret venue; The Rules of the Game (2006), from which the song Show Me Yours was featured on the hit U.S. TV series The “L” Word and Delishious (2003), short-listed for a 2004 Juno Award nomination.

Her sophisticated style and subtle delivery evoke such vocal greats as Sarah Vaughan, Lotte Lenya, Judy Garland and Rosemary Clooney. Elizabeth Ahlfors of New York’s Cabaret Scenes describes Adi as, “A tad Dinah Washington, a hint of Lena Horne, the enveloping warmth of Doris Day, all gift-wrapped up in a unique sound that is singular Adi Braun!” Adi’s repertoire ranges from the Great American Songbook to European cabaret, to contemporary songs by Canada legend’s Shirley Eikhard and Gordon Lightfoot as well as her own originals. Whether she is singing in English, French, Spanish, or German, Adi Braun is “a power-frau who gives jazz standards a unique touch, telling stories that are miniature life moments” (Rheinische Post, Düsseldorf, Germany).

Born in Toronto, Adi Braun grew up in Europe surrounded by music and musicians. Her parents were opera singers, and her father, Victor Braun, was one of Canada’s leading baritones.  Her first instrument was piano, which she began studying at the age of six.  With no formal voice lessons, she made her first pop/jazz recording at age 19.  Following family tradition, Adi trained classically at the Royal Conservatory of Music and the University of Toronto’s Faculty of Music. She began her singing career as a classical recitalist, a soloist with orchestra and on-stage in operas and operettas alongside her brother, baritone Russell Braun. In addition to her many musical roles, Adi teaches German art songs at the Royal Conservatory of Music and is a German diction coach for the Canadian Opera Company.

Adi started “singing sideways” in the late ‘90s and returned to the music she loves – which she calls “cabarazz” – drawing on aspects from both cabaret and jazz. After winning a local competition in 2001, she was catapulted to center-stage as one of Canada’s leading jazz vocalists. In 2007, Adi was nominated as Best Major Jazz Vocalist of the Year by the Manhattan Association of Cabarets and Clubs (MAC). 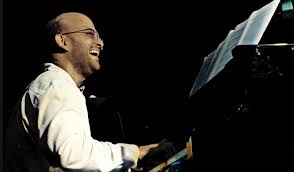 Award-winning pianist and composer Adrean Farrugia is one of Canada’s most distinct voices on the piano.

Since the late 1990s, Adrean has been in high demand as a freelance performer and educator. Keeping a busy touring schedule, mainly as a sideman, Adrean has toured extensively across Canada and the United States as well as in venues across Europe, Australia, the UK, Israel, and Japan.

As a leader Adrean has released four albums. His second album ‘Ricochet’ was nominated for a 2011 Juno award for best contemporary jazz recording. As a composer, Adrean has penned more than 30 works to date.

Adrean is currently on the faculty of Mohawk College where he teaches contemporary piano, ensembles, and improvisation. He has also served on the faculties of York University and Humber College. He has also done workshops/clinics at the University of Colorado, University of Toronto, The University of Western Ontario, The Banff Centre for the arts, The Sydney and Brisbane Conservatories, and in Warsaw Poland as part of the Polish Jazz Society’s 35th annual Summer Jazz Workshop.

Adrean has been a contributing writer to piano guru Larry Fine’s publication “The Piano Book”, the world’s foremost publication on all things piano. Adrean has also been a performer and panelist at the 63rd, 67th, 69th, and 70th annual Conference on World Affairs in Boulder Colorado.