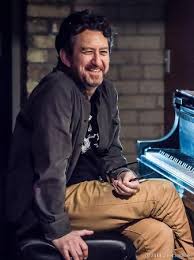 Tickets for Dinner and Show are $65
The show starts at 8:00
Dinner reservations available starting at 6:00
Seats are limited, so please book them soon. Jazz Bistro is open and respecting social distancing. In order to do so, reservations are mandatory.
Menu below

Gemini Award (Canadian Screen Awards) winner Lou Pomanti is one of Canada’s most accomplished [producers, composers, musicians, and musical directors. Lou’s original music and performances are featured on soundtracks and recordings heard all over the world.

Lou studied music at Humber College in Toronto in the Jazz Program. He was the recipient of The Duke Ellington Scholarship Award for Arranging.

In 1980 Lou received a call from David Clayton-Thomas to join the seminal jazz rock group Blood, Sweat and Tears and toured the world. It began a decades long association that culminated in 2010 with Lou producing DCT’s new CD “Soul Ballads” for Universal Records.

1983 saw the beginning of Lou’s session career as the #1 top call pianist/synthesist in Toronto. His playing and arranging have enhanced the recordings of Michael Buble, Gordon Lightfoot and Anne Murray; as well as Rock’s Kim Mitchell and Triumph. His record credits are a “Who’s Who’ of the Canadian recording industry.

The mid 90s saw his emergence as a prominent TV and Film composer, which continues to this day. The list of credits is too long to include here, with shows on CBC, CTV, Global, HBO, Showtime, HGTV, and many more.

The 90s also saw Lou’s emergence as one of the country’s top Musical Directors. Lou was the MD for the Canadian Songwriter’s Hall of Fame ( 6 times), the Gemini Awards ( 7 times ) , the Genie Awards ( 5 times ) and the Junos. Lou has written and MD’ed music for James Taylor, Herbie Hancock, Leonard Cohen and Michael Buble to name a few. Lou received his Gemini award for arranging and conducting “Both Sides Now” for Joni Mitchell’s induction to the CSHF.. Lou also MD’ed the CBC TV show “Hockey Night in Canada Anthem Challenge” with mega-producer Bob Rock which found a new hockey anthem for Canada. And he conducted the orchestra for the CBC’s “How Do You Solve a Problem Like Maria” on live nationwide TV.

Lou arranged the orchestra for Michael Buble’s smash hit “Haven’t Met You Yet”, which has sold over 7 million copies worldwide. He 8 arrangements in total on Michael Buble records.

Lou was proud to have composed the music for the 2011 Pan Am Games Handover Ceremony in Guadalajara, an 8-minute suite for multimedia.

The last few years have seen Lou’s return to his first love, making records. He has contributed to and/or produced recent albums by Marc Jordan, The Tenors, Matt Dusk, David Clayton-Thomas, Barbra Lica and many more.

In 2012, the City of Toronto named a street after Lou to honour his accomplishments.

Soup of the Day