Toronto-native Michael Shand has already spent well over half his life playing music. He began piano lessons at the age of 13 and progressed quickly through the Royal Conservatory of Music’s classical system, completing grade ten after a span of only four years. However like so many young players who define this unique generation, raised in an era of unprecedented musical diversity and accessibility, Michael exhibits a creative energy that encompasses many genres. Blues, reggae, hip-hop, funk, house, R and B, soul and Latin music are the raw elements that form his identity as a performer, writer and arranger, but jazz is the common thread that binds them all together. Shortly after leaving York University with a Bachelor of Fine Arts degree and the coveted Oscar Peterson Scholarship Award, Michael became pianist and musical director for “Kollage”. He then went on to perform in all sorts of genres on stages across the world, with countless artists along the way. He has dazzled audiences in Hong Kong, Paris, Jakarta, Dubais, Amsterdam, London and throughout North America with such artists as Molly Johnson, Divine Brown, Glenn Lewis, Gerald Eaton of the Philosopher Kings, Jully Black, Jacksoul and Kardinal, jazz-crooner Matt Dusk, new R and B diva Kreesha Turner and powerhouse jazz-vocalist, DK Ibomeka for whom Michael also serves as musical director. Added to his resume most recently were recordings with Shannon Butcher for her new-release, “Words We Both Can Say” and a piano and arranging credit for Ibomeka’s newly-released sophomore album “I’m Your Man”.

Ross MacIntyre is one of the most sought after bassists in Canada.  He has played on hundreds of recordings including 11 that have won or were nominated for JUNO awards.

Ross attended the Berklee College of Music in Boston, and graduated with his Bachelor of Music degree from the University of Toronto.  He studied privately with Ray Brown, Dave Young, Pat Collins, Mike Downes, and Joel Quarrington.

He was the music director and composer for The Garden Brother Circus, and has played in the pit orchestra for numerous musical theatre productions with CanStage, Young People’s Theatre, and Mirvish Prodictions.

In 2011 Ross released a duet alum with the great Pianist Mark Kieswetter, and it has been met with critical acclaim. The Whole Note magazine wrote, “Kieswetter and MacIntyre have captured the essence of what the best piano/bass duos are all about: elegance, economy, precision, fluidity, style, intimate, grace, and that magical, intangible chemistry – the simpatico.” 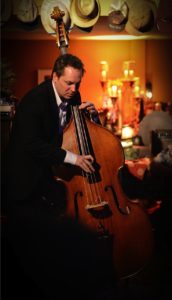 Amhed Mitchel started playing drums at a very young age under the influence of his father, a great Cuban drummer himself. From his early 20’s, Amhed was already playing and recording with and for some of the Cuban Music treasures like the Eight Times Grammy’s award winner and creditor of many doctorates the great “Chucho” Valdes, Cesar lopez and Havana Ensemble, Guitar virtuoso Elmer Ferrer, Roberto Carcaces,…. just to mention a few.