Richard Underhill‘s wonderful warm alto sound, great writing and arranging skills, and in-from-the-outside soloing make him one of Canada’s most distinctive jazz performers. Richard won a 2003 Juno Award for his jazz solo debut ‘Tales from the Blue Lounge‘ and was nominated for the Prix du Jazz at the 2003 Montreal Jazz Festival. The founding member of Toronto’s acclaimed Shuffle Demons, he has toured Europe and Canada to critical acclaim for over 22 years. A truly original jazz composer and arranger, Richard’s exciting original music captivates audiences with singable melodies, outstanding musicianship, and engaging performances. His new album ‘Moment in Time‘ is a fan favourite and has garnered significant critical acclaim. 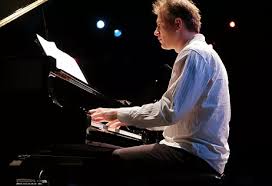 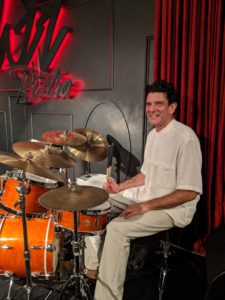 Drummer, Composer, Producer and Singer Daniel Barnes was born into an artistic family in the central hub of downtown Toronto, Canada in 1965. His father Milton Barnes was a classical music composer with symphonic, chamber and choral works for concert stage and dance to his legacy. His Mother Lilly is a published author and scriptwriter for television and radio. His Brother Micah is a singer songwriter best known for his work with The Nylons.

Daniel found his calling at age 5. His education came through private studies in Toronto and attending The Banff Centre Summer Jazz Workshop in the late 1980’s. At 16 he began regular professional work with The Micah Barnes Trio who played local clubs and graduated to the concert stage opening for international touring acts. Daniel went on to perform and record with the top echelon of Canadian artists including Holly Cole, Joe Sealy, Jane Bunnett, Hilario Duran, Molly Johnson, Richard Underhill, Jake Langley, Brian Browne The Flying Bulgar Klezmer Band, Maryem Tollar, Theresa Tova, DJ Socalled, The Bourbon Tabernacle Choir, Bass is Base and many more. Throughout the 1990’s Daniel toured in Europe, The U.S., Africa and The Caribbean with Ethiopian singing star Aster Aweke (“The Aretha Franklin of Ethiopia” TIME magazine). Daniel has released two of his own jazz Cd’s; 2003’s “Culmination” and 2007’s “Classic Beauties”. They receive critical acclaim and considerable airplay on The CBC and JazzFm in Toronto. His band has appeared at The Toronto and Montreal International Jazz Festivals among others and has been broadcast in performance on TV Ontario. His Cd’s are available through major retail outlets, at itunes.com and through www.danielbarnes.net. Daniel was nominated “Drummer of the Year” at both the 2003 and 2007 National Jazz Awards while his work with others has thrice been nominated for Juno awards with a win in 1996 for Joe Sealy’s “Africville Suite”.