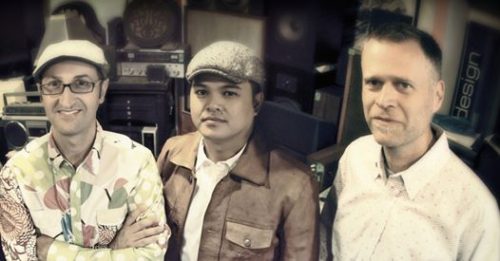 The Triodes is a genre-jumping instrumental group that traces its roots to the upbeat R+B, funk, and old school soul influenced jazz of Eddie Harris, Herbie Hancock, and John Scofield, and the instrumental music of groups such as Booker T and the MGs, and The Meters, but with generous nods to early reggae and ska, modern jazz, experimental rock, and electronica.

The group’s album Chunked is a favourite of Jazz Fm, and features unique covers of everything from Desmond Decker’s hit “The Israelites” to groovy Duke Ellington on “Blue Pepper” and the funky and quirky originals of guitarist Michael Occhipinti and keyboardist Paul Neufeld.  Special guest and long time friend Jeff Coffin (The Dave Matthews Band, Bela Fleck and the Flecktones) is featured on several tracks, and rapper PHATT Al makes an appearance as well.

Formed as a spin off of their JUNO Award (Canda’s Grammy) winning jazz ensemble NOJO (Neufeld-Occhpinti Jazz Orchestra), Triodes’ co-leaders Michael Occhipinti and Paul Neufeld have been collaborating on projects since they met at Toronto’s York University in 1988. NOJO won a JUNO for its 1995 debut CD and each of the group’s four subsequent original music releases has yielded a JUNO nomination, including two recordings with brilliant clarinetist Don Byon and one with sax legend Sam Rivers. NOJO’s most recent work is an original arrangement of Pink Floyd’s Dark Side of The Moon.  They’ll be joined by Triodes drummer Doan Pham.