Alex Bird – Vocals
Ewen Farncombe – Piano
Jacob Gorzhaltsan – Sax & Clarinet
Julian Anderson-Bowes – Bass
Eric West – Drums
Alex Bird is a Jazz singer and songwriter in Toronto, ON. With a swinging style and an indescribable charm, Alex is currently working on an entirely new chapter in the Great American Songbook. His original debut album “Whisky Kisses” was released in October 2020 and received reviews, awards, airplay, and distribution around the world. Following that momentum, Bird has just released his second album, “You Are the Light and the Way” (Nov 2021). Written with Ewen Farncombe (Piano) This sophomore album was made possible thanks to the generosity of the Canada Council for the Arts, who fully funded the release of this emerging new talent.
“Every now and again, an act emerges from the cosmos and shakes up the planet. One of those groundbreaking bands is Alex Bird and the Jazz Mavericks. Bird and his group of talented players are rewriting the textbook for vocal-infused Jazz.” – Brian M. Owens at Metronome Magazine (Boston) 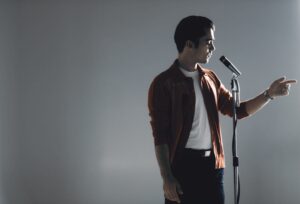