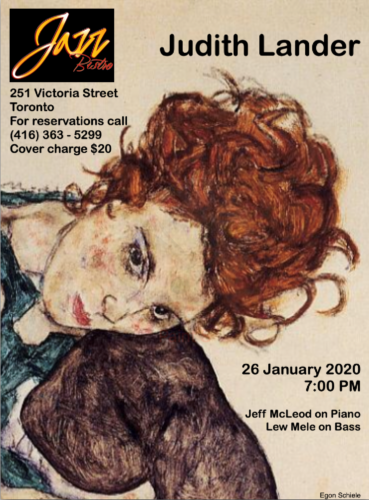 Judith Lander is a consummate interpreter of cabaret’s finest offerings. Her repertoire ranges from pop to Broadway, with the likes of Stephen Sondheim, to classical cabaret including Kurt Weil and Jacques Brel, with a sprinkling of jazz.

“My music is very emotionally driven, as well as musically driven, because I have been a singer for 50 years,” says the singer, composer and actor. She has performed on Broadway and in other major North American cities in the original hit production of Jacques Brel is Alive and Well and Living in Paris, culminating with a memorable performance with Brel himself at New York City’s famed Carnegie Hall.

“I have quite a background of music, so it is about connecting and reaching the hearts of the audience. It’s very important to me to do that. There are a lot of singers these days who are imitations of imitations. They are not really connected as much to the musical lyrics as they should be, and I feel audiences today really hunger for that,” says the Winnipeg native who now lives in Oakville, Ont.

“Cabaret is an eclectic combination of music that is either political, emotional or humorous, and it is coming back because people are tired of the sterility that’s out there. Usually songs that have a personal bent have more emotional nutrition and people need that right now.”

Lander, who is respected as a composer, most notably for compositions for ballet, including Diary, which has been performed by the National Ballet of Canada, the Hubbard Street Company of Chicago and the American Ballet Theater, recently released an acclaimed recording of songs she has sung on stages across the world entitled “In My Life.”

The 65-year-old has made a remarkable comeback, having retired from cabaret performance in her 50s. “What is amazing to me is that I’m in my 60s and I still sing really well, and that, to me, is an amazing gift,” Lander says. “If you are trained properly, there’s no reason why you can’t maintain a lot of your voice, but you will lose a certain amount of your range, or it will shift. For me, I go a little lower with my range, but there were songs that I couldn’t have done before, like September Song – but I was too young to do it – or Carousel by Brel that goes faster and faster and is quite mad at the end, and when I was young, it was extremely difficult to maintain the song. Now that I’m older, I can handle it much better because of experience, the [richer] interpretations and the power that I have at this age.”